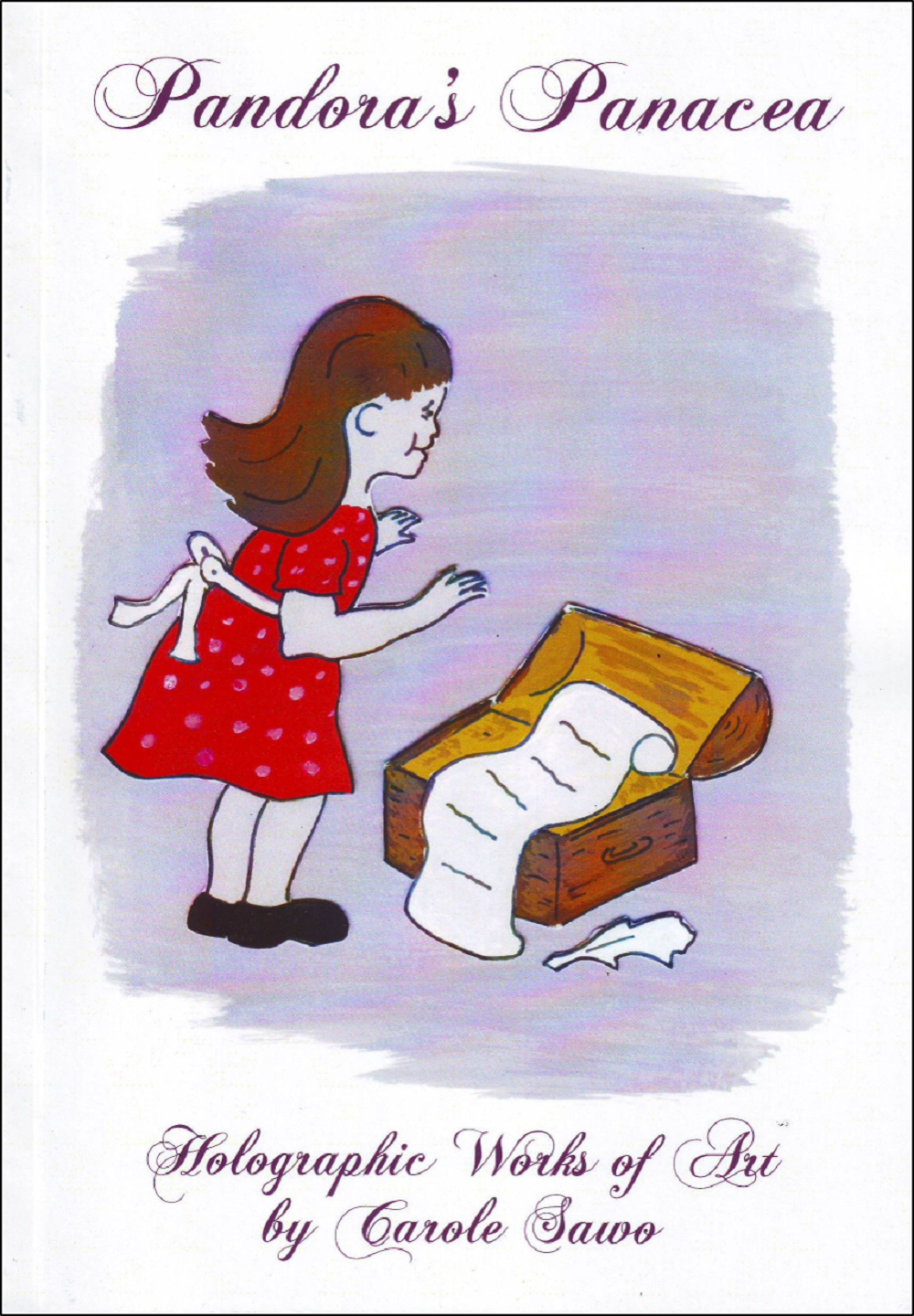 The full title of this book, Pandora’s Panacea ~ Holographic Works of Art (2007) within which contains a plethora of uniquely presented thought-provoking concepts.  The works ‘in progress’ push the boundaries of contemporary psychological theory, spiritual interpretation, mystical musings, and evolutions of consciousness.

Primarily discussing the fundamental archetypal pattern in perpetual motion within the psyche, Carole Sawo draws on artwork and fairy tales (such as the Wizard of Oz) as interpretive metaphor for the human mind.   Within Pandora’s Box, Carole describes beautifully the path of associative psycho-spiritual development with emotional experiences indicative of an internal evolution of consciousness;  together with the predictable trials, tribulations, and eventual expansion of a mind in transition ~ making normal that which is contemporarily thought abnormal.

‘Pandora never opened the box the first time, the boy she loved did.  But such is collective misperception. And when all the plagues passed through the minds of men, Pandora returned to the box and opened it again, because there behind all ills she had glimpsed the brightest light
… and its name was hope’.   (Carole Sawo)

Included in this pioneering text are well-researched inimitable additions to the human energy system; the black, silver, and gold chakras; along with their symbolic, psychological, and spiritual associations.  Set out deliberately in line with conscious expansion, within the latter parts are prophetic poems; collective patterns of heart experiences proceeding from the inner child, through to Carole’s own insightful concept of a fourth stage of ego; into love, spiritual transformation, and mystical occurrence.  Careful observation between the lines reveals to the discerning reader not only a prophetic description of the individual path of transformation but the collective path of humanity.

This book offers a beautiful alternative view of the myth of Pandora, containing a very curious contemporary twist and a deeper reflection on the Pandora within all of us.   Perhaps written ahead of, or even outside of our time, Pandora’s Panacea is a hologram in itself.  The reader is invited to perceive both projection and reflection, to meet their mystical ego and resolve with their etherical self.

‘An unusual book that begins with a reflection on an incident when a blackbird tumbled down the author’s chimney into her living room. Carole Sawo puts herself in the bird’s position of falling headlong into what seems to be a disaster; there is nevertheless an interesting reciprocity and parallel between bird and human as we too fall down in the course of our lives, and get up again. This is what Carole calls the work of transformation, of seeing an opportunity in every event, however challenging. The introduction is a commentary on a number of holographic works of art, including The Wizard of Oz, The Scream and two of Michelangelo’s sculptures. Carole then explains the structure of the volume as the poetry moves through the different phases of life, which psychologists and those who have seen more deeply into their experiences will recognise. The tone of the poems is very variable so it would not be possible to pick one out as typical. However, one of my favourites ‘In Honour of the Death of the Ego’ begins with a picture of isolation, sorrow, anger, and disappointment and metamorphoses into a feeling of peace and rebirth, expressing surprise ‘that I would live past my dying/ that I could be truly free.’  A later poem is entitled  ‘The Comedy of Life’, at the end of which ‘when feelings stopped but eyes perceived/ I  found in front of me/ no tragic consequence of fate/ but Divine’st comedy.’ We open Pandora’s box of life, according to the author, not out of curiosity, but rather in faith, fortitude, wisdom, and love; the very qualities we need in our work of transformation.  This book is an inspiration along the path.’

Available in paperback and ebook.